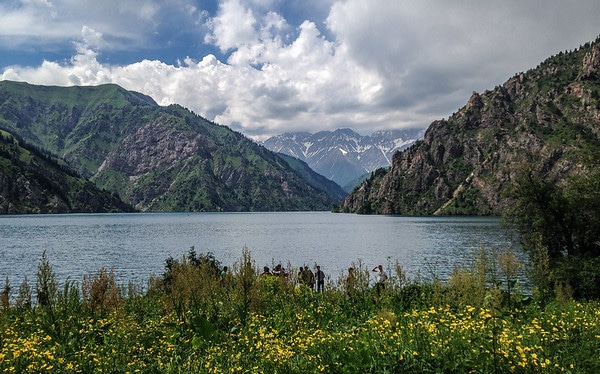 Kyrgyzstan is full of amazing places. Unforgettable tour along the country, where the most of the nature consists of snow-capped mountains and pure lakes. For almost week you will be surrounded by natural and cultural richness of Kyrgyzstan. Kyrgyzstan tour is best for those looking for something unequaled anywhere else. Southern Kyrgyzstan is hotter in terms of climate and of human temperament, the nation’s modern bread basket, and a historic Silk Road centre.Osh and Jalal-Abad in some ways have more in common with the more-conservative portions of the Fergana Valley just over the border than with industrialised, Russified Bishkek and the north.

Meeting from Bishkek (Manas) airport and transfer to hotel Rich ***.
After putting the luggages and change of clothes, depending on the weather
We will start at the very heart of the capital – Ala Too Square. We will walk around and see the Parliament House, Lenin Statue, the White House, the change of the Guard of Honor, and Manas Monument, National Philharmonic.
Overnight at the hotel “Rich or similar” Meals:(1 Breakfast,1 Lunch, 1 Dinner)

Bishkek Ala Too square park

After breakfast we drive to Suusamyr valley to the Chichkan gorge. Time permitting, spend some time with opportunities to take hikes, ride horses or simply meet the local shepherds who still adhere to age old traditions. We cross Too-Ashuu Pass 3180m, Communicating with local shepherds who still keep customs and the way of life of their ancestors.Overnight Hotel Ak Ilbirs or Oson or similar (single rooms not available)
Meals: 1 Breakfast, 1 Lunch, 1 Dinner.

After breakfast we drive to Lake Sary-Chelek is one of the most beautiful places in Kyrgyzstan. It is located on the territory of the state biosphere reserve “Sary-Chelek” 500 km from Bishkek.
The reserve is known for its unique scenic and pristine nature, abundance of wild animals and the lake itself. The length of the lake is 7.5 km, the widest place of the lake is 3 km, the maximum depth is 244 m. Overnight at the hotel “Guest House Sary Chelek” Meals:(1 Breakfast,1 Lunch, 1 Dinner)

After breakfast depart to Arstanbap. The Arstanbap Valley which is near the Dashman Forest Reserve where there is a largest walnut forest in the world. Arstanbap is a unique creation of nature and is situated at 1,600 meters above sea level. The main treasure of the southern forests is the walnut tree. Walnut trees can live up to 1,000 years, can reach enormous sizes, and they produce an abundance of walnuts. Muslims consider the picturesque fruit forests to be sacred. According to legend, in the ancient times there lived an extremely hardworking man called Arstanbap, who served the prophet Muhammad (S.A.S). All those who visit the forest can take away with them a bit of its paradise. Overnight at a local family run guest house
Meals: (1 Breakfast, 1 Lunch and Dinner)

Early in the morning leave from Arslanbob to Osh.
Before arriving in Osh we suggest going on excursion in the ancient minaret and mausoleums in Uzghen town (60 km from Osh). Uzghen was one of the capitals of Karakhanid State, occupied vast areas in Central Asia in 10-12 centuries AD. Islam became state religion in this khanate in Central Asia that is why minaret and mausoleums of governors were situated in the very citadel (center) of the city. We also climb up to Sulaiman-Too and visit Cultural Museum which opened in early 2001 to mark Osh’s 3000-year anniversary in October 2000. It’s strong on local archaeology and ethnography but has little info in English. There are some great weapons, displayed as if caught up in a mad whirlwind
Night in hotel “Sun Rise”/similar
Meals: (1 Breakfast, 1 Lunch and Dinner)

Today we drive to Batken.
Batken region is located in the South-West of the Kyrgyz Republic. It borders Tajikistan in the South, Uzbekistan in the North and Osh region in the East. The total area of the region is 17.0 thousand square kilometers.Batken and the Batken region itself are known in Kyrgyzstan for their rare red flower named Aigul. There are many legends about this flower. And it blooms on the mountain Aigul-Tash once a year. Also, this part of the country is famous for its juicy, unusually sweet apricots.
Night in hotel “Baykut”/similar
Meals: (1 Breakfast, 1 Lunch and Dinner)

Today we exploring Aigul-Tash Mountain is located near to the Kara-Bulak village in Batken region. This place is really unique, because only here grows the flower-endemic Aigul and some interesting place. Then we drive to Airport for flight to Bishkek.
Domestic Flight Schedule:
Batken – Bishkek: Tuesday, Thursday, Saturday. Time of departure 13:15
“Air company TEZ Jet”
Meeting at the Airport MANAS and transfer to Hotel Rich.
Meals: (1 Breakfast, 1 Lunch)Dinner not included

Level of difficulty: This tour is suitable for both children and adults.

Conditions: If you have some specific sicknesses you need to bring own first aid kit with necessary medicaments

Road transport in Kyrgyzstan plays an important role, accounting for 99.8% of cars and 95% of the turnover. In the early 2000-ies the total length of roads amounted to 40 thousand kilometers, of which 17 thousand km were paved.Road surfaces vary and their general state demands 4-wheel drive vehicles in good condition. The quality of roads, the weather conditions and the quality of the vehicles are decisive in calculating the time needed between destinations

Under the previously concluded (for applicable international law the principle of “silent consent” on the continued application of international obligations up to the signing of and accession to new international treaties) agreements between the former USSR and foreign States following a visa-free regime: Here to see..

Money you will need USD cash in all countries. A credit card is of very limited (only in capital cities) use and is really only useful as back up but should in no way be relied upon as source of money